The Need Has Never Been Greater to Understand the Islamic Republic of Iran’s Goals in its Region, and to Work Together 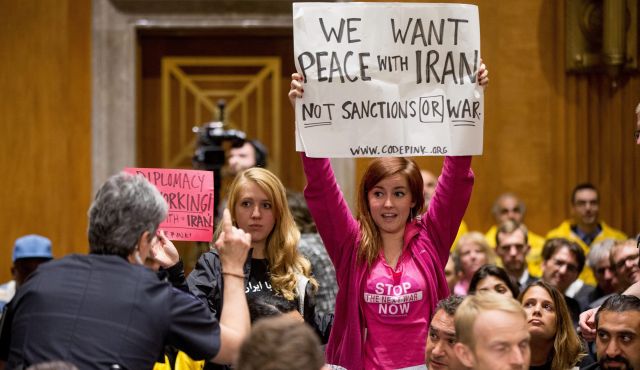 In this time when global growth capitalism is heading off the rails, preparing for a crash… ”The need has never been greater to understand the Islamic Republic of Iran’s goals in its region,  and work together!”

OWHR Institute Model: Kindle Policies of generosity, ignite new Government-to-Government and People-to-People policies to provide environmental sanity and a "Global Marshal Plan," for we are together on this one small planet - “EAARTH”*

*EAARTH spelled with “AA” (author and environmental leader Bill McKibbin’s notation, as a reminder that Planet Earth is now irrevocably altered, due to human activity/Global Scorching)

Since the overthrow of the Shah, the Islamic Republic of Iran’s desire has been to nurture independent nations form among Arab nations in the Middle East and North Africa.  Whether Shiite or Sunni, an Arab state is seen as preferable to Iran as opposed to states propped up by outside hegemonic powers, such as the US controlling the region, or through US surrogates, Israel, Egypt and Saudi Arabia.

Now is that time to kindle Policies of Generosity leading to policies of environmental sanity and new government-to-government and people-to- people relationship with Iran, Russia and other geopolitical foes of the West!

The US must understand that its hegemony over the Middle East is not viable, …is a losing policy for the US.  It also props up U.S.- surrogate Middle Eastern powers, such as Israel, Egypt and Saudi Arabia, in the fostering of their ambitions and discrediting Iran’s role as a broker and mediator in the Middle East.  This, in turn, threatens to undermine any efforts by U.S. president Obama to normalize relations with Iran.

The USA’s CIA is a culprit in this regard. New York Times journalist Seymour M. Hersh writes that, “the CIA had been conspiring for more than a year with allies in the UK, Saudi Arabia and Qatar to ship guns and goods – to be used for the overthrow of Assad – from Libya, via Turkey, into Syria.” (London Review of Books, Jan 7, 2016). So we see the malfeasance of the US-CIA backed overthrow of Libya, to establish a new regime which supports the transfer of weapons for the further destabilization of Syria.  These actions further a U.S. policy of hegemony in the Middle East. The US is now void of any rational, equitable power broker or mediator role to conflicts in the Middle East and North Africa. The malfeasance of US hegemonic policy is certainly the cause of the most destabilized Middle East in modern times.

As a dangerous overlay to the devastation now taking place by corrupt, even criminal US military hegemonic policies behind the bombings in Syria, Iraq, Libya, and Yemen, is a fragile, crippled Capitalism, with the eventuality of a collapsing growth capitalism and its earth destabilizing attachment to unethical, earth scorching oil.

We in the west are likely perpetuating this capitalism every time we buy something. As Dieter Duhm at Tamera, Monte do Cerro and the Institute for Global Peace Work remind us, “The material wealth of our society is based on exploiting other peoples and cultures. The arms industry, with the support of all national governments, delivers weapons into crisis areas. They deliver neither food nor relief but bombs! This is the essential structure behind today's drama. Progressive groups and political parties in Europe try to break this vicious cycle, but they do not succeed because the global arms industry's lobbies are too powerful. This is why we are stuck with the simple unavoidable truth: whosoever delivers weapons sows the seeds and proftis of war.  Whosoever sows war will harvest refugees.” And we see this now and this flow of refugees for the western countries' “harvest of war” will only increase.

We are on the path to a needed collapse.  The market panic we have seen intermittently over the past seven plus years, now stemming from China’s weakening dollar, and irrevocably in many European countries is again establishing that growth capitalism is in its last years and must be replaced with an ethical, “new bottom line” economy.

Economy models based on love and generosity and seeing all humans as the embodiment of the sacred found in the needed policy of a Global Marshal Plan, as prepared by the Network of Spiritual Progressives. NSP’s Global Marshal Plan “provides enough funding to eliminate domestic and global poverty, homelessness, hunger, inadequate education and inadequate health care, plus repair the global environment. The most modest estimates for this would be to dedicate 1-2% of the Gross Domestic Product (GDP) of the world’s developed nations toward funding this goal each year for the next twenty years.”

As the NSP advise, “Create an international, unbiased, non-governmental agency for receiving the funds (from both foreign aid and alternative sources of financing) and distributing them in a way that is environmentally sensitive, respectful of native cultures, safeguarded against corruption, protected from manipulation to serve elite interests, and empowering of the people in each region. This agency or mechanism should be governed by a board of ethicists, religious leaders, artists, writers, social theorists, philosophers, economists, scientists, and social change activists, all of whom have demonstrated in the ways that they have lived their lives and conducted their public affairs that they give higher priority to the well-being of others than to the well-being of corporations or wealthy elites. “

“We must also insist that the plan be implemented with a clear message that although the West has superior technology and material success, we do not equate that with superior moral or cultural wisdom. On the contrary, our approach must reflect a deep humility and a spirit of repentance for the ways in which Western dominance of the planet has been accompanied by wars, environmental degradation, and a growing materialism and selfishness. We have much to learn from the peoples of the world, their cultures, their spiritual and intellectual heritage, their ways of dealing with human relationships.”

So, back to Iran. Kindle Policies of Generosity Leading to Policies of Environmental Sanity and New Government to Government and People to People Relationships with Iran and inviting Iran into the preparations for such needed economic policies, will be a needed step to end the use of power and domination by nations, to move to a “new bottom line,” and will reduce the dangers we currently are seeing of nation states using military force, with such dangerous, irresponsible outcomes.  Approaching Iran with Policies of Generosity, inviting Iran’s role as an arbitrator to conflicts in the world. The US, other Western Countries and Canada must allow independent Arab and African countries to emerge and prepare the needed Global Marshall Plan and new bottom line policies for environmental sanity, an Environmental and Social Responsibility Amendments to the US Constitution and Canada’s Charter of Values, and bring all major nation states, including Iran and Russia into this arbitration, with hearts open.

There is now an opening for moving to new policies of generosity by Canada and Prime MinisterTrudeau, leading us forward and being a model to other nations.

Middle East and Iran analyst Hillary Mann-Leverett indicates that President Obama, while not informing the American public of the full reason for his government’s new rapprochement with Iran is attempting to move the USA to a new order, a pragmatist positioning for the future.  This new rapprochement is most delicate and could be wrecked by a future Republican led administration. And Obama would do well to explain his rational, in order to win over the US public over to this new reality in the world. For as Dr. Hillary Mann-Leverett makes clear, there are new world powers that are well engaged in political diplomatic and major economic relationships with Iran, to include Russia and China.  As Mann-Levertt makes clear (and we in Canada would will do well to take notice and focus (as she believes the Obama administration is) “which is the changing balance of power the Middle East, …whether they like it or not! And even the changing balance of power around the world.

I think for all of its flaws, the Obama administration is trying to navigate those reality based changes in the balance of power, in the Middle East and around the world.  And this deal will focus the United States on those necessary correctives in our own foreign policy, to get us off the track of trying to impose military dominance all over the Middle East and around the world.  That is the importance of this agreement (with Iran and the US). But President Obama hadn’t actually explained that to the American people and therefore he opens the window for all these various (kind of) insulting tactics against his policies (by the extreme right-wing Republicans that dominate the Republican Party.).” Hillary Mann-Leverett, RT’s Cross Talk, televised debate, March 17, 2015.

For the sake of humankind and all life forms on this remarkable planet earth, we will need to cooperate, to live and flourish, together on the new planet EAARTH.