OWHR Institute-Quebec Director, Isaac Romano (L) with noted anti-war representative of the people, U.S. Senator George McGovern (R) at a major news conference held during the five day OWHR war resister, war resistance conference held in British Columbia in July 2006.  The event drew many Canadian former draft resisters and military deserters, who came to Canada during the U.S. War in Vietnam, in what was the largest U.S. outward migration, since the U.S. Revolutionary War.  Many stayed to build productive, satisfying lives in Canada, made more possible with position of support for U.S. war resisters and opposition to the U.S. War in Vietnam, voiced by the Prime Minister, Pierre Elliott Trudeau and the Canadian progressive politicians of that era.  Of the over 75,000 men and women war resisters who came and settled in Canada during that conflict, more than half chose to stay and build their lives in Canada, even after the Carter Presidential Pardon was offered.

New York Times bestselling author Robert Fulghum is Honorary Co-Chair of the OWHR Institute-Quebec Amnesty Working Group.  As a Northwest Unitarian Minister in the late 1960s and early 1970s, he counselled numerous military deserters-war resisters during the Vietnam War.  Some of these U.S. war resisters made their way to Canada, to raise their children, building illustrious careers, ...including many successful journalist, media personalities and authors.  One such U.S. military deserter that settled in British Columbia during the U.S. war in Vietnam, authored over 40 books and could well become a Canadian equivalent to Vincent Van Gogh, with his acumen for exceptional painting artistry. There were many such contributions to Canadian life, by that immigrant group, from the U.S. 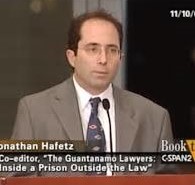 Matt Adams is the legal director for Northwest Immigrant Rights Project, where he has worked since 1998 representing immigrants from all over the world. He has an extensive practice in federal courts with now up to 15 published victory decisions granting relief to his clients in the United States Courts of Appeals.  In addition, he has served as class counsel in several successful class action challenges before federal district courts, including Franco-Gonzalez, et al. v. Holder, et al., where the district court granted class certification on behalf of detained individuals with mental impairments, and issued a permanent injunction, ordering the United States to create the the very first appointed counsel system in the immigration courts.  Franco-Gonzalez v. Holder, 2013 WL 3674492 (C.D.Cal. 2013). He was also class counsel in A.B.T. v. U.S. Citizenship and Immigration Services,  2013 WL 5913323 (W.D.Wash. 2013),  representing a successful nationwide class challenge to practices preventing asylum applicants from obtaining employment authorization. Much of his litigation is focused on challenges to immigration detention. 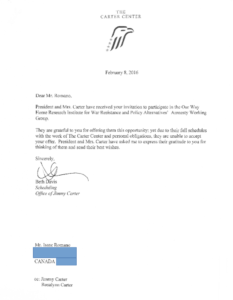 In 1977, President Jimmy Carter used his moral authority, with Presidential Pardon allowing those U.S. military deserters and draft resisters who were in exile in Canada and other countries of the world, to select, should they wish to return to the U.S., to resume civilian life, without threat of punitive arrest.  Than you President Carter.

We are pleased to announce and share this letter we received from former President Jimmy Carter and First Lady, Rosalynn Carter.  They wrote to us to share their appreciation of our Amnesty Working Group, Amnesty series of forums, wishing us their best wishes for our important initiative.  The President and First Lady are in their later years and still active doing good work for our world and indicated their regret that their busy schedule, in these productive, later years of life, mean that they could not join us.  We thank them for their support and response and send our best regards and thanks to former President, Jimmy Carter and First Lady, Rosalynn Carter.

And Now, Our Work Ahead

In 2020, when we will likely see the next Democratic US Administration in the White House, OWHR Institute-Quebec is planing to host a series of four, day-long sessions, bringing both US and Canadian progressive lawmakers to the Amnesty Working Group day-long series of forums.  We will use the U.S. - Canada Amnesty Working Group forums to build the relationships among progressive lawmakers in the U.S. Congress and the Canadian House of Commons (and with official representatives from the White House, or perhaps see the U.S. President in attendance.).  We will use these forums to lay the ground work to see the way forward to a complete Amnesty for U.S. military deserters from the Iraq war or other associated conflicts,  so that these men and women of conscience are allowed, to have choice to return to civilian life in the U.S., without fear of reprisal, such as military arrest.  This will allow these men and women of conscience to return to their families and friends, if they so choose, provided by either Presidential Order or by Congressional Bill, to create what U.S. historian Howard Zinn would call “a people’s history” for Americans and for Canadians.